Career Advancement: Taking the Next Step 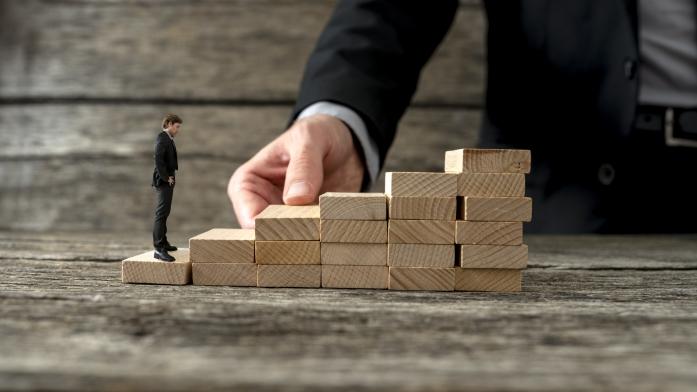 The biggest turning point in my career and in my personal life came when I realized my true value. When I broke through the mental barrier of self-imposed doubt, I truly began to shine. This breakthrough led me down the successful career path I have followed today, and it started with a change in focus.

As a young adult in my 20s, I didn’t think that I could speak to 50-year-old CEOs as a credible business expert, but around my 30th birthday, I realized that had been studying things that CEOs were not. I realized that I had valuable knowledge, and I not only could, but had a responsibility to share that knowledge with CEOs and other sales leaders that need it. That’s when I officially joined Sandler Training as a sales trainer.

After acquiring your first job in the selling world and beginning your professional growth, like me, you are probably still looking for a way to advance your career. Whether your goal is to increase your influence, earn a promotion, or request a raise, it all begins with a change in your mindset. Below I have listed a few best practices that I have used personally, in each of the situations above.

Different people have different motivating factors. For me, what was most important early on in my career was influencing success among my team. I wanted to be know as the go-to-guy to make stuff happen, but was also prepared to be held accountable should we fail. I saw taking this responsibility as a rewarding way to earn the respect of my peers and ensure that I continued to challenge myself and grow in my role.

To increase my influence, I began by determining where I could contribute most and compared those areas to the needs of the market and our organization. Once I determined that my skills were best used by motivating and training the newest members of our sales force, I requested that my manager let me lead informal training sessions. My confidence and initiative impressed my boss, but I also became the expert to those new sales people. Soon, everyone in the organization was looking to me for guidance. This increased influence gave me a tremendous sense of enjoyment in my job, and it directly helped our team achieve its goals.

Sometimes influence is not enough, and after a certain point, you want to be rewarded with a new position. There is no coincidence that this section is labeled “EARNING a promotion.” To advance within a company, you must prove yourself worthy and understand the value that you provide. Just as it did with increasing your influence, this step begins with demonstrating confidence and ability to those responsible for the decision in your promotion.

Before leadership believes you deserve a promotion, you have to believe it yourself. Start by identifying what makes your right for the role. Once you have outlined your thoughts, examine what the history of that position has been, how you can improve the position, and how you can provide more value in the new role. Finally, by advancing to the new position, determine why it will be more advantageous to your company than remaining where you are.

Steve Martin, the famous comedian, once said, “Be so good they can’t ignore you.”

Once you have some identifiable strategies for how you can improve the organization and build value in your promotion, plan how to best demonstrate them to those responsible for making your promotion decision. Your goal should be to make this a no-brainer decision when a position becomes available.

Similar to earning a promotion, if you want to request a raise, you must go about it methodically. Those responsible for monetary decisions within a company are typically hesitant to increase salaries or dole out bonuses without good reason.

To display your worth, represent your value with the deliverables that you provide to your company. Whether that can be done by representing the conversions, new sales, or new leads that you are responsible for, bringing it back to the numbers is always a good place to start. How can you verifiably prove that you are bringing the company ten times the amount of money you are requesting?

Compare your numbers now to when you began making your current salary. If the decision maker is still not convinced, inquire what numbers you would have to hit to receive the raise you requested. This method is a good way to demonstrate that you understand your value, you’re ready for more responsibility, and you’re willing to take on more work to get it. If nothing else, you’ve demonstrated your commitment to the company.

Ascending in your career is never easy, but it can be done with the right approach, attitude, and behaviors. By being intentional with how you represent yourself and your value, you can greatly increase your chances of growing within your role and advancing in your career.

Click here for more information on how to maximize your personal performance.

Mike Montague is a Sandler Certified trainer and the Director of Content Marketing for Sandler Training Home Office, where he is passionate about sharing the Sandler success principles and teaching the interpersonal communication skills needed to greatly improve your life and business. Mike has entertained and educated people as a Sandler trainer, on-air radio personality for his local stations, and other live events. He is also an accomplished writer, contributing to the Sandler book, LinkedIn The Sandler Way, business magazines, and the Sandler Blog.

A Thank you letter from the competitor

The power of the 30 second commercial